There are many ways of studying Kanji, or anything, for that matter. Some are fun, and some are, well, less fun.

Some people don't bother learning Kanji by itself. Learning vocabulary will expose the learner to Kanji. However, at the beginning, you do need to study Kanji.

Each person has a different learning style - what is yours - are you a visual / auditory or kinesthetic learner? -> https://www.learningstylequiz.com/. To get the most of learning, it would be best to match this.

Here are 7 ways of learning Kanji.

1) Calligraphy - By drawing the Kanji  while learning

It is rare that you will have to write Kanji. The most you will do is to read Kanji / type on a computer.

If you just want to get a handle of the stroke order and the feel of the Kanji, or if it helps you to remember,

or you just like writing Kanji with a pen,

or even a brush,

you you can try one of the Kanji paper worksheets that takes you back to pre-school days.

If doing the JLPT, use the unofficial JLPT lists to know what to study:

The author, James Heisig essentially assigned a meaning per "piece" of each Kanji and he made stories about them which you will have to stick to since the stories just build and build as the characters become more dense.  There are pros and cons to using his method.

Kodansha method has a similar approach and is highly rated due to the focus on building blocks, important Kanji, and the focus on distinguishing similar Kanji - learn 2300 Kanji:

3) Kanji stories (your own stories method)

Similar to Heisig but using your own "stories" to remember stuff:

These are "optimized" flashcards - the system shows more of the stuff you get wrong, but stuff you get right gets shown at the right time (just right before you begin forgetting). You can use your smartphone anywhere while waiting in line, etc.

Anki - there's a computer-based app and Android app -> then load the lists from the free content repository.  https://apps.ankiweb.net/

5) Typing up lists of similar Kanji.

In my case, if I'm still confused after all the spaced repetition and stories, I make lists of the confusing similar Kanji and their meanings. Seeing the similar Kanji side by side makes their differences more evident and memorable.

I make typewritten cheat sheets / memory aids and post them on the wall where I can see them everyday. In the bedroom you can see them at night and in the bathroom you can see the Kanji again in the morning. There's no end to Kanji nightmares. It's easy to setup Japanese typing on a computer, there are many guides online for Windows.

No downtime here, we're still studying even when relaxing.

Games that are about learning Kanji:

https://lrnj.com/ -> old school RPG game where you type the Kanji

Or any Japanese game that lets you read Japanese.

Yomichan Firefox or Chrome plugin makes reading Japanese much easier like a dictionary pop-up for any word on the page. It also integrates with Anki SRS, so you can save words you want to remember.

Each person will have different ways of studying that works for them, because, well as the yojijukugo* goes:

which means "to each their own; So many people, so many (colors / styles) minds, or also, in this case, learning styles."

And also, studying language is (usually) not a sprint (unless you're trying to cram for the JLPT in a month), it's (usually) a marathon. But aren't marathons also difficult?

Maybe I should say studying a language is a walk (in the park), if we take it

one step each day, which would also be too slow in real life, but figuratively, it could be the way to go.

**Yojijukugo are 4-character phrases or proverbs or simply words.. see more of them here: https://en.wikipedia.org/wiki/Yojijukugo

The best way to study for the JLPT or any exam for that matter,
is to try to take mock tests, check your weak points, study, test again, repeat until your test scores break 80% and above consistently.

My rule is that I should be getting 50% on mock test scores 6 months before the exam, and progressively improve on that. To do that, we can use books for learning the material and books specifically for testing grammar and reading.

For the vocabulary and Kanji, I just use online flashcards. No need to buy Kanji books or vocabulary books in my opinion. But, for the grammar and reading, that's where the books really helped me. Links to the actual books included below.

The second time around, I had a better understanding of how to study and passed.

Reading speed is essential.  Grammar patterns are essential. Listening is not that difficult, just get exposure. Vocabulary can be picked up from flashcards. Kanji is learned passively while learning vocabulary.

These resources helped me pass the 2nd time around...

1) Moshi to Taisaku N2 - I used this for N3, excellent resource. And used it again for N2, still excellent. Answer key has explanations.

2) Kanzen Master reading - for Reading, an absolute must! Must! Must! Answer the sample exams included with explanations for the answers. For N2, reading speed is essential so this is what I needed.

3) Power Drill Grammar - My favorite for grammar. 45 minutes per question set, not boring, learn to pace yourself perfectly!

You can take 1 Power Drill test a day and not get study fatigue. This is good for 0-3 months before the exam.

4) Mimi kara oboeru - book with audio, absolutely useful -> bombard yourself daily with the grammar patterns. I used the JLPT2 old version, still useful. The book contains additional example sentences not in the audio. Passive learning, just play the audio. If you want active learning, follow along with the text.

5) A dictionary of japanese grammar - very useful even after the JLPT, 3 books for lifetime Japanese learning. If something is not clear, it will usually be after you look it up in this excellent reference. Get the complete set -> basic, intermediate, advanced.

Sou Matome series (too easy, below actual exam difficulty) - I used these the first time and did not pass. :(

The classic Kanzen master is an absolute lifesaver. Answer the mock reading exam at the end.

JLPT Try! is good for early on, around 3-6 months before the exam, for acquiring information. It covers listening, grammar, reading, vocabulary in one book. It's like an integrated all in one book. It's good but the exercises are too easy. I would still supplement it with a mock exam type of book.

My favorite for grammar. 45 minutes per question set, not boring, learn to pace yourself perfectly! You can take 1 test a day and not get study fatigue. This is good for 0-3 months before the exam.

5) A dictionary of japanese grammar - very useful even after the JLPT, 3 books for lifetime Japanese learning. If something is not clear, it will usually be after you look it up in this excellent reference. Get the complete set -> basic, intermediate, advanced.

To make your Japanese / JLPT study more efficient, I recommend using books for this purpose. You learn faster; less study time, but still... 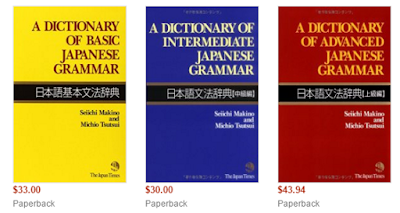